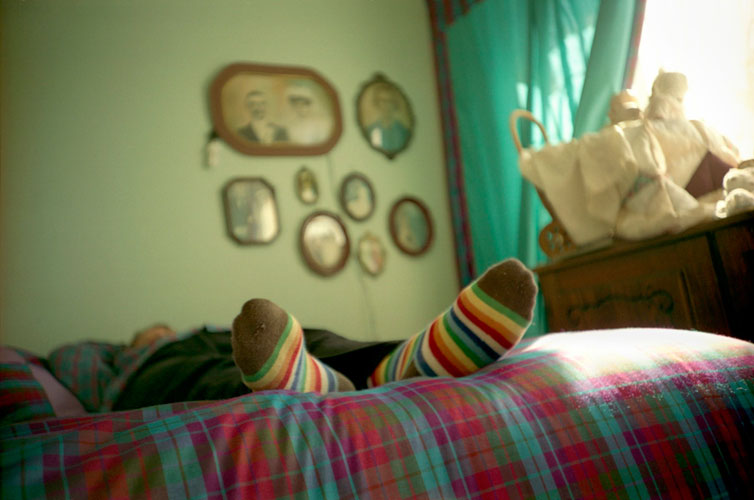 Set the rules, give out the toys and let the kids play is not only a fair child-minding principle, it’s also an initiative that has historically been one of the more exciting options for generating ideas and inspiration. The Surrealists and Dadaists used this strategy to particularly good effect.

It is upon this refreshing premise that ‘The Lomo Exhibition’ at Photo.za bases itself, comprising work by selected artists who were supplied with Lomo photographic equipment. The exhibition offers a happy mix of eye candy and conceptual heat. The chosen artists are Kathryn Smith, Stephen Hobbs, Lolo Veleko, Christian Nerf (known here as dcmnt), Ruth Motau, Hannelie Coetzee and Abrie Fourie.

While some of these are ‘the usual suspects’ in initiatives of this nature, the show includes others who use photography out of curiosity and some for whom it is a livelihood.

The Lomo phenomenon offers a take on things that dilutes any self-conscious seriousness with the subject matter at hand. Developed in the early 1980s in Russia, the Lomo camera enjoyed a revival some 10 years later as a retro novelty in Vienna. And now, just over 10 years since that patch of frenetic Lomo activity, it’s very hot once again. This hardy little camera, with its lens that doesn’t allow for colour distortion, has become a trendsetter through its panorama of funky and often unpredictable results.

Hobbs, Smith, Coetzee and Fourie worked with the 35mm camera, while Veleko and Motau worked with 120mm version and Nerf worked with both. The camera is both versatile and temperamental, which only adds to its charm. The package that comes with it (rules of social behaviour, dress code and accessory must-haves) complete the Lomo look and experience, as do the idiosyncrasies of the pics themselves.

Serious play is what these artists get up to in an exhibition less about great conceptual manoeuvres than experiments and challenges addressed to the medium.

We find Hobbs literalising his verbal brainstorms for which he’s become known in a freestanding sequence of shots. Machine-like in its construction, this work straddles two- and three-dimensional formal issues and is held together with (what else?) Lomo clips. It plays poetically with Jo’burg’s urban space dynamics, as do Smith, Nerf and Fourie’s works, with different visual building blocks and meaning.

The works of these artists offer an emotional remove, an aesthetic sophistication and a cleverness which allows the work to wittingly and wittily straddle and demonstrate awareness of the issues that photo-as-art and low-tech photo, for that matter, offer in an age of digital slick.

Motau, Veleko and Coetzee do something different. Dealing directly with the historical ‘sweetness’ to be had in photographing images and people, each of these women attain a level of ‘critical twee’, providing the medium with an edge. Coetzee’s series contemplates moving away from her parents’ home for the first time. Through her Lomo lens, she looks at the familiar as though it were strange, framing subject matter that ranges from teacups and chairs to her parents’ relationship. The Lomo effect – acid hues and light spills – subverts any sentimentality.

‘The Lomo Exhibition’ as an experiment, disrupting the ‘normal’ flow of concerns with which each of these artists involves him/herself, is an interesting success. It’s historically and conceptually meaningful, but it is light enough for Rosebank shoppers on the go.