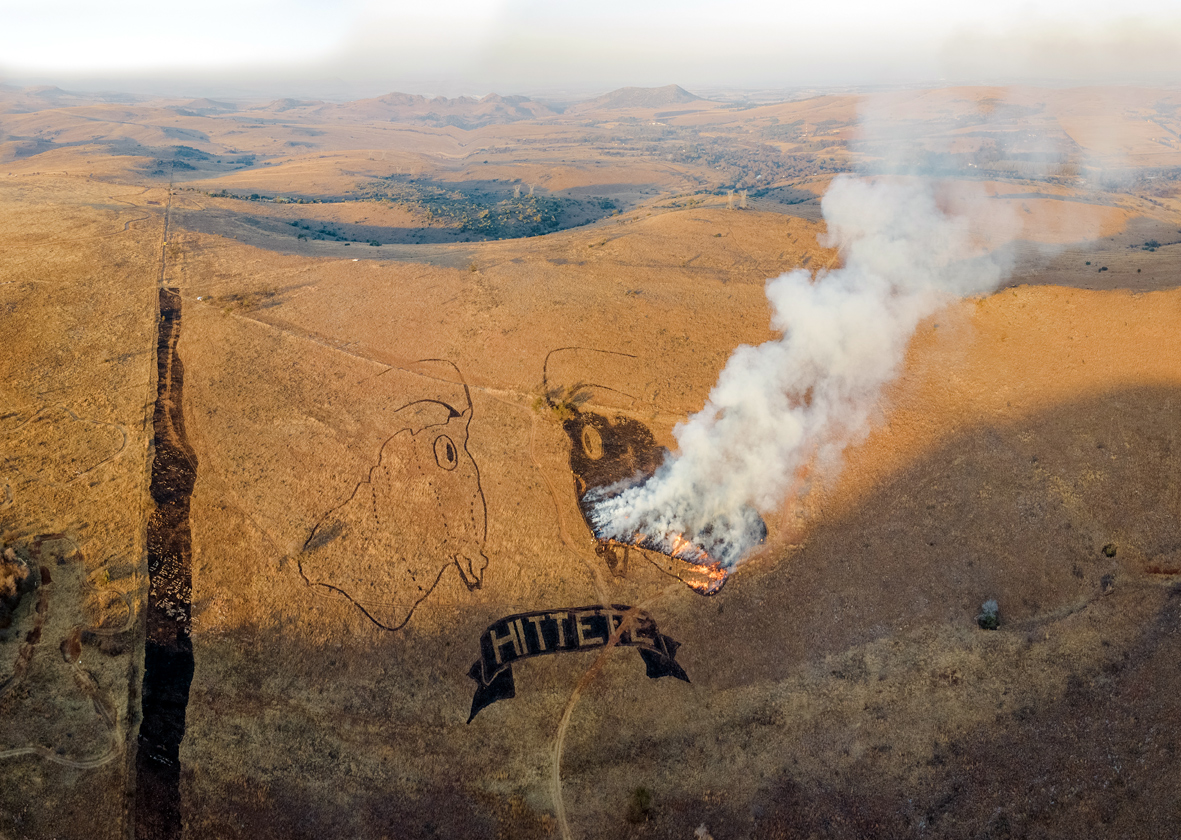 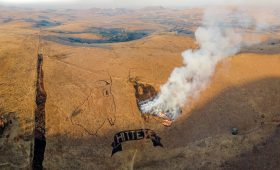 Hannelie Coetzee works with a range of scientists to learn about how they study nature and the environment. The questions have evolved over time: in this case Coetzee and Archibald are engaging about how to apply prescribed fire in a protected environment, as well as understanding the biodiversity responses to these fires. Fires are a natural part of our highveld ecosystems and, with the help of artists and scientists, society can find ways to live successfully alongside these fires.

The 2015 and 2017 burns evolved over a number of years. What began as stimulating conversations between Sally Archibald and Hannelie Coetzee became an active project which forced the worlds of art and science to co-habit the space of NIROX.

Projects like Locust & Grasshopper (2017) and Eland & Benko (2015) make scientific research accessible to the wider public. They develop mutual goals between disciplines that usually don’t overlap. For the 2017 artwork government-funded Working on Fire will perform the  prescribed savanna burn of Locust & Grasshopper at sunset. This burn will be superimposed on the 2015 #Firegrazer burn Eland & Benko to re-imprint the ‘memory’ of the previous burn on the landscape. This re-imprinting is part of Archibald’s science inquiries.

The audience will join the artist on a 6-km hike to view the #Firegrazer performance followed by a small solo exhibition of Coetzee’s movable artworks at the NIROX Sculpture Park pavilion, curated by Lizamore & Associates. The hike will pass some world-famous artworks, and allow time for the audience to experience the beauty of the Highveld grassland. The performance grants the audience access to the Khatlhamphi Private Nature Reserve which recently added giraffe to its suite of indigenous grazers and browsers.

The work begins from the point of dialogue and does not culminate in the performance but continues to live on in the documentation and data capturing and research which circulates post-burn. The performative aspect of the work links all the various teams / groups of people where they work together to realise the visual art project.

ABOUT THE ART PERFORMANCE

As visual inspiration for this large-scale performance, Hannelie has taken the locust and  grasshopper insects as symbolic emblems. The ‘HITTETE’ banner, used the the Afrikaans Idiom, ‘Dit was so hittete’ (‘a close shave’ in English) refers to how close we are to stuffing up the planet. With the right kind of partnerships and communication we can still contribute to changing perceptions towards nature.

The emblematic representation of these two creatures expands on the ideas of diversity but also emphasizes the role something so small can play in the ecosystem. Hannelie selects her subject matter to not only expand and educate herself on these intricate elements of our environment but also to make these complex systems visible for the public.

Hannelie’s various references and visual choices  link and provide visual commentary on how intricately we have changed the environment this one insect as a lens. Providing a sense of socio-environmental commentary on the Anthropocene Era (the geological age where human activity has visibly changed the environment) Hannelie suggests that the drastic changes in our landscapes, in the name of progress / development/ innovation, may be at the expense of a resilient ecological future.

“In the Anthropocene Era we should urgently learn a deep understanding of how our actions impact the earth and how we can then implement logic that works with nature. So, for example, when locusts swarm and consume a crop we should understand what the underlying drivers are for the ‘pest’.  Humans, like locusts, will move to new environments when their habitat becomes untenable. Whether we call this migration or a swarm, the need to survive is the same. The consequence  of human activity for example extends to consideration of what conditions may have  been created that feed runaway fires. As a society we control and poison nature while there are more logical and environmentally forms of arriving at the same result. “

This artwork and public performance highlights the evolution of scientific research and practices and through making them accessible and visible, positively impacts our current thinking, the questions we have asked in the past and what are the right questions to be asking now. ”

ABOUT THE SCIENTIFIC RESEARCH

The 2015-2016 research on the site tested whether small managed fires create more productive grassland communities by altering how antelope use the landscape. Wits MSc student Felix Skhosana monitored antelope usage of the burnt veld after the fire and found that Wildebeest, Hartebeest and Blesbok focused their grazing there and kept the grass short. He showed that in the long-term these small repeated fires create very different grassland habitats that look degraded, but contain productive, palatable grasses.

The 2017 burn will take this further by assessing the value of this habitat from different perspectives: beyond being a resource for grazing animals, Archibald and colleague James Harrison want to see whether these short-grass ecosystems promote particular bird, insect and wildflower species which increase biodiversity. For years the law in South Africa was the farmers should wait until the first rains before burning and avoid annual burns. This view focused on ensuring food for cattle and preventing erosion but ignored other aspects of ecosystem function. Therefore, depending on your perspective these habitats can either be considered good or bad for the ecosystem as a whole.

“We hope to use the science-art partnership to synthesize different views on the same ecological phenomenon, and engage the public to discuss how societal values influence conservation ideals. This should help to build consensus on appropriate land management” explains Sally Archibald.

ABOUT THE NEW GRASSHOPPER STUDY

In African grasslands with their abundance of large mammals many people forget about the smaller herbivores. Grasshoppers and termites can sometimes consume as much or more than these large mammals. Smaller animals like grasshoppers are also more dependent on particular habitats (or “niches”) and we suspect that there are particular grasshopper species which are adapted to and prefer the short-grazed patches that we have created, and that these habitats have value to a range of different organisms, not just Wildebeest and Blesbok. We will be testing this by systematically sampling Grasshopper communities in different habitats at NIROX, and monitoring how they respond to the fire artwork.

ABOUT THE FIRE PERFORMANCE

Locust & Grasshopper (2017) expands on the previous study from  2016 Eland & Benko to understand  grassland ecology and figure out ways to communicate these facts, to inspire people’s decisions progressively toward land management. In Nathanael Johnson’s book, Unseen city:  The Majesty of Pigeons, the Discreet Charm of Snails & Other Wonders of the Urban Wilderness (2016) he states that ‘emotion is the glue that makes reason stick’. With these multi-dimensional interventions, Coetzee educates a growing audience who is learning as the scientists are discovering new knowledge, inspiring them to become active citizens.

University of the Witwatersrand, South Africa

Sally Archibald works on understanding the dynamics of savanna ecosystems in the context of global change. Her work integrates field ecological data, remote sensing, modelling, and biogeochemistry. She is involved in collaborative research projects with Yale University, Edinburgh University and the University of Liverpool among others which variously work on fire-grazer interactions, inter-continental savanna comparisons, the importance of land-atmosphere feedbacks, and pursuing a global theory of fire. AP Sally Archibald is closely linked with research projects at the Global Change and Ecosystems group at the CSIR where she holds an affiliate position